The major objective of the Cardioprotection Group is the delineation of novel cardioprotective pathways that can be activated to limit cell death in various pathophysiological conditions, such as heart failure, myocardial infarction or diabetes.

An important emerging concept is that the heart has an innate immune-related protective mechanism. In the context of ischemic heart disease, our latest research showed that Tumor Necrosis Factor alpha (TNF-alpha), a major player of the immune system, initiated the activation of a cardioprotective signalling pathway that involved the activation of the signal transducer and activator of transcription 3 (STAT-3).  We have have named this the SAFE (Survivor Activating Factor Enhancement) pathway (Lecour, J Mol Cell Cardiol, 2009). Our current research aims to better characterize this novel path which represents great potential in the development of new drug therapies for ischemic heart disease.

Moderate and regular consumption of red wine (2-3 glasses/day) confers cardioprotection. However, the exact components found in the wine which can account for this protective effect still need to be delineated (Opie and Lecour, Eur Heart J, 2007). We have recently investigated the cardiovascular role of 2 biogenic amines (ethanolamine and melatonin) found in red wine and we have demonstrated that both amines, given at a concentration found in red wine, can protect against ischemic heart disease (Kelly et al, Basic Res Cardiol, 2010; Lamont et al, J Pineal Res, 2010). Using genetically modified animals, our current research aims to delineate the cellular mechanisms involved in red wine/melatonin-induced cardioprotection.

Echocardiography and its role in pulmonary hypertension

Imaging plays an important role in the diagnosis and prognosis of a patient with PH. Literature shows that imaging such as echocardiography and magnetic resonance is imperative in the future of translational research. Echocardiography of the rodent right ventricle proofs to be a difficult task due to limited acoustic window and different morphology compared to the left ventricle. It is however possible and is lately persistently used to measure hemodynamics and right heart parameters in studies with animal models of PH. At the Hatter Institute Gerald Maarman, a PhD student is currently doing his PhD project on cardioprotection against the cardiac damage associated with PH. Prof. Laurie Blauwet is currently helping Gerald find the optimal position to hold the Echo probe in order to obtain an apical four chamber view of the rat heart, the aortic valve and pulmonary artery in order to determine the right heart parameters. 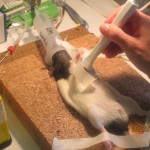 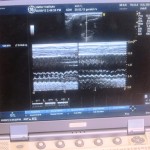 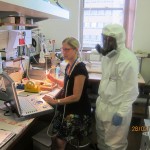