Posted on Dec 14, 2012 in News by Hatter Institute Comments Off

The University awarded the degree Doctor of Engineering (DEng), honoris causa, to Fanaroff for his exceptional contribution to the diverse fields of radio astronomy and the developing trade union movement during the 1970s; for his role as respected government official and advisor after 1994 for the benefit of the South African society; and for his impeccable reputation as a scientist and his formidable skills as an organiser and negotiator that resulted in South Africa’s successful Square Kilometre Array bid. 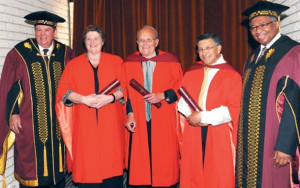 14 December 2012 Pictured in the photograph is Ms Gill Marcus, Prof Lionel Henry Opie and Dr Bernard Lewis (Bernie) Fanaroff who received honorary doctorates from the University of Stellenbosch on Friday, 14 December. With them are Dr Johann Rupert, Chancellor of Stellenbosch University (left) and Prof Russel Botman, Rector and Vice-chancellor (right).

Marcus received the degree Doctor of Commerce (DComm), honoris causa, for her leading role as politician, business leader, monetary policy maker and concerned South African citizen; and for her sound leadership as Governor of the South African Reserve Bank.

Opie was being honoured with the degree Doctor of Science (DSc), honoris causa, for his contributions as internationally acclaimed cardiologist, for his formidable and virtually unequalled research output, for his pioneering work on the energy metabolism of the heart, and for his exceptional talent as author and lecturer to translate complex scientific processes into comprehensible concepts.